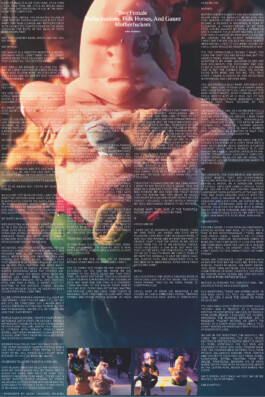 With this issue we’re back to school, entering the classroom again, this chaotic and fragile entity, a place of collective folding, unfolding and being folded. Celebrating with an exhibition the year of the 100th anniversary of women* at Kunstakademie Düsseldorf, the Sammlung Philara has partly supported the making of this issue. And while we’re clinking glasses with mixed feelings about the youth of this anniversary and it being a celebration for mostly white cis women, who have had and have the priviledge to be included within the grand walls of this institution, we’ve gone searching for cracks and loose bricks, for cockroach informants, the unteachables and counter curriculums. We’ve taken the occasion to ask fellow recent and former students of the Kunstakademie, about their teachers in the very broadest sense and about the transformations they’ve experienced, provoked by encounters that have shook, changed, guided or troubled them. You will find the contributions made in response to the questionnaire by Nara Bak, Niko Chodor, Keta Gavasheli, Nicholas Grafia, Klara Kayser, Jihye Lee, .lfur Logason, Jorge Loureiro, Fernanda Rueda, Rosa Sarholz, Nan Shen, Peter Schlegel, caner teker, Haiqing Wang, spread throughout the sections of the newspaper, all marked by the T T graphic header. Many of the contributors in this issue are themselves also teaching: in the section LIMINOID FRICTION Aveek Sen, Anna Stahn and Lena Hugger share with us vanities, fantasies and (hi)stories of being taught and teaching. And while teachers in their multiple forms spin threads throughout the newspaper, it is often times of crisis and insecurity that make us long for guidance – but also for perspectives and storytelling. So in this strange moment we’ve asked ourselves which are the lessons we’ve recently learned and which are the tools or methods we’ve discovered or rediscovered. We were brought to think about previous epidemics or ‘new’ diseases, the politics of health and how disease and diagnosis has been politically instrumentalized to discriminate against precarious and othered groups. Thus in the first section of the newspaper we are listening into the BLIND STETHOSCOPE, auscultating death, darkness and disease. It is bringing together contributions that attempt at making a diagnosis, with mended and pitched tools. These examinations are looking into memories, matters of the heart, dismissed suffering and haunting shapes burning themselves into the retina: Monilola Olayemi Ilupeju has shared with us parts of her upcoming publication Earnestly. You will find her writings in more than one section – here All Of The Men That Have Rejected Me and Stiff Neck which, like diaristic manifestos, speak of surviving hurtful memories, transmutations of violence and bodily sensations. Tommy Brewer historically examines the disease he calls “lynch culture” and whose undead remains from a brutal history are until today proliferating into the conceptions of race, society and attitudes. As we see in Catherina Cramer’s Insickure, making or unmaking disease is a power tool. Insickure is dedicated to myalgic encephalomyelitis also known as “chronic fatigue syndrome”, which most frequently affects women and has throughout history, until this day, been psychologized and dismissed as a fashionable complaint. And while the BLIND STETHOSCOPE is a painless examination tool and here stands for a pitched perspective on societal sickness and healing, we’re shown that sometimes you’ ll have to hold the scalpel yourself even if you can’t stand the sight of blood. The section MUTUAL AID brings together strategies, healing techniques, anti-affirmations and recipes. Lisa Tracy Michalik’s Autoeroticism echoes the controversy of masturbation, most strongly disputed in the dawn of the enlightenment, where it was linked with hysteria and ‘feared’ by the authorities, for the ‘danger/threat’ that masturbation implies to capitalist society, in terms of it being free and accessible to everyone, anti-reproductive and anti-productive, thus running counter to capitalist economy – especially when practiced at work. Much is a matter of diagnosis and the tools and techniques utilized for making it and providing treatment. Elena Malzew’s The Herbal Knowledge of Kharitonovo / Травяные знания из Харитонова takes us to Elena’s childhood land, where her grandmother taught her the herbal knowledge of generations of women from the village; a knowledge that developed in the absence of health authorities, to fill the needs of the people. The section COMPOSTIAN BEINGS explores dirt, rot and fermentation and takes us down a slippery path into the compost pile; generating thermal energy and fertile environments from the discarded and rejected. In Backwash Natsuko Uchino writes “A sterile environment is perhaps clean, but is it resilient? It strikes me that the same word, sterile, is used to refer to one that is unable to procreate.” And finally in this amorphous living mulch we’ve also met someone: Kay Whale – whose cringy, magical “microbial, otherworldly, algorithmic” charm was introduced to us by Asher Hartman in the Centerfold Poster. (Find the introduction to the centerfold poster on the left). We’d love to have Kay Whale as our new school director, or our mother. After all, would it be too much to say that more than half of what we’ve learned we’ve learned from our mothers? And not just our biological ones, but whoever has shown us motherly generosity, passion, rage and patience. Alison Yip’s Anal Moon Moan Panorama is a deconstructed moon calender, inspired by her mother’s habit of clipping her nails over a newspaper, while watching Chinese soap operas. However, the lesson at times being a negative imprint of it’s positive. Nicholas Grafia’s quotation- poem (from In the Life by Essex Hemphill) is a letter to a distant mother, about the tribe of men of color and sons who love men; about things you cannot learn from a mother or have to hide from her. All this being said, we hope you will enjoy exploring this body of multitudes that this issue gathers.